A profound personal and communal conversion: our Oblate Mission
General Administration
Africa-Madagascar
Latin America
Respecting natural resources
A soup kitchen for the poor
And the volcanic ash did not deter us…
Europe
Canada-United States
Asia-Oceania
Anniversaries - September 2011
Suffrages for our Deceased

On June 14-16, Oblates from Bolivia, Peru and the United States participated in an international conference on Extractive Industries that focused on “the problem of natural resources in Latin America and the mission of the church”. The conference, held in Lima, was organized and sponsored by the Justice and Solidarity Department of CELAM (Bishops Conference of Latin America) and MISEROR.

Roberto CARRASCO ROJAS, Edgar NOLASCO from the Oblate mission of Santa Clotilde, Peru, Gilberto PAUWELS from Oruro in Bolivia and Séamus FINN from the United States Province’s JPIC office in Washington, DC, joined more than 70 participants from dioceses and communities that are on the front lines of the extraordinary expansion of the extractive industries in Latin America.

Extractive industries, including mining and petroleum, are under new pressure to respond to the demands for minerals and energy that are continuing to increase across the world. The price for basic commodities like gold is also an important driver in the increased demand for precious and rare metals. The development of new technologies and processes for exploration and extraction has made it possible for mining and oil companies to penetrate deeper into areas and regions that were previously inaccessible. These developments have brought them into contact and conflict with communities and areas that were previously untouched by their activities, especially indigenous communities and peoples.

During the opening days of the conference, people from all regions and communities, including bishops, priests, religious, indigenous, and peasants, have shared their experiences, including the great suffering, destruction of livelihood and conflicts that have become a part of their daily lives as a result of this increased incursion of extractives into countries such as Bolivia, Peru, Chile, Guatemala and Colombia. Also included were an analysis of the input from the opening session and proposals and recommendations for actions.

The seminar was organized to search for a way to place the challenges of the extractives industry within the mission of the Church, the People of God. It sought to increase knowledge about the actual state of this type of industry in its global dimensions and the social, political, ecological and economic character of its consequences, beginning from a doctrinal, theological reflection that will guide the design of certain lines of pastoral action. (Séamus Finn)

A soup kitchen for the poor

“There is a boy here with five loaves and two fish.” (John 6:9) So Jesus performed the miracle of the loaves.

The Oblates have had almost 25 years of missionary presence in Iztapalapa, east of Mexico City. Twenty years ago, there originated a project for the poor women of our community. The “Poor Women’s Center” was founded by Father Yvan TREMBLAY who is already enjoying the family of heaven. This center provides support to women in four areas: education, food, health and job training. Here, the woman has her own space for developing, forming community and for helping herself in her social obligations. The Center has passed through many stages in its life as an institution. Today, 20 years into this dream, we wanted to open a small soup kitchen for the poorest folks in our community. This has become a reality, thanks to the initiative of our psychologist, Doctor Cecilia Orellano, who has been working with us for half a year. She rendered this service with street children in the city’s downtown. 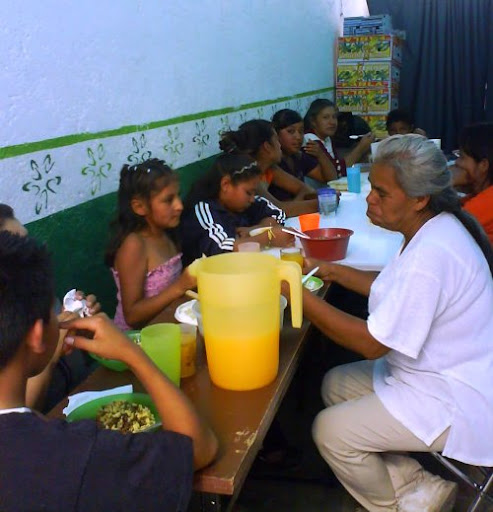 To achieve the goal of this new project, the Center took a census of the poor families in our community’s slums (also known as camps). These are areas where people were brought as squatters by political groups and whose papers are not in order. Very poor families live in this area.

Since we do not have sufficient resources, we selected 30 people, mostly children, to begin our soup kitchen. We offer one meal a day, consisting of soup, rice, stew and beans. The people pay only five pesos for the meal; some do not pay at all. At almost a month since we began this service, more and more people approach us, applying for support. I would like to stress that it is the mothers themselves of the children who have volunteered their services for cooking the food, and many people from our community have donated a chicken, water, rice, soup and beans. Also, some friends of the association have made donations for this cause. This is a blessing because we feel that together, we make it possible to feed this small community.

I believe that God is working wonders in these people. Therefore, we have decided that at the end of the month of July, we will be able to invite more people to eat, of course, with the support of the community. We thank our brother Oblates for their support and also the people who, one way or the other, are kindly supporting this effort. (Fr. Roberto TOLENTINO)

And the volcanic ash did not deter us…

In connection with restructuring of the Congregation, Playa Pascual, Uruguay, was the site of an early June first meeting of the Oblate commissions of Paraguay and Uruguay, seeking to deepen fraternal dialogue and mutual understanding in view of an eventual unification. In recent years, our Units have shared various activities, council meetings, exchange of personnel, preaching of retreats, missions, gatherings of young Oblates, of lay associates, etc. It was proposed to form a commission of 2 or 3 members from each Unit in order to find out what we have in common. Present at this first meeting were Guido ACOSTA, Aníbal CASURIAGA and Roger BULAMBA from Paraguay, and from Uruguay, Antonio BUONANNO and Jorge ALBERGATI.

The first thing we noticed was the climate of sincerity and freedom as well as moments of laughter and joking. In this first stage, we want to know each other better. Therefore, we have prepared a paper in which we examine whether we have a common understanding of fundamental issues such as formation, mission, finances and community. The next step will be to dream together. This is the “key” to a process toward greater dialogue. To the extent that we equip ourselves with rationale and motives, we will move forward, secure and energized, toward that which the Congregation asks of us. These motives will help us “move beyond necessity to opportunity.”

What was unforeseen were the ashes from the Puyehue volcano that made us postpone the meeting by one day, since the airport was closed, and also to extend it by two days, thus giving us the opportunity to visit “La Guadalupita,” our formation house, Oblate houses in the south and to take part in Eucharistic celebrations in our barrios. (Jorge Albergati)