Each year the Catholic Diocese of Brownsville, Texas, sponsors the Oblate Trail Ride. People sponsor the bicyclists and the money raised goes to various charitable projects. 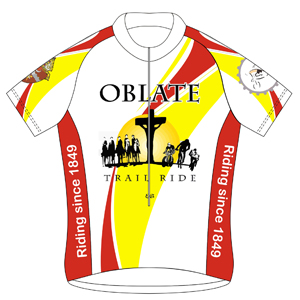 This year the ride occurred on the feast of the Founder, St. Eugene de Mazenod, commemorating the 150th anniversary of his death and beginning the year of St. Eugene.

At 6 o’clock in the morning, 500 participants arrived at the cathedral parking lot, wearing bright red, white and yellow jackets, emblazoned on the front with the word Oblate in bold black letters, with the Oblate cross beneath it. On the left of the cross were the 5 famous horsemen of the original Calvary of Christ. On the right were 3 modern day cyclists. On the back were the words, “Riding since 1849”, referring to the arrival of the Oblates at Port Isabel, Texas, on December 3 of that year.

The riders rode the same trail that Fathers Jean Bretault, Pierre PARISOT, Pierre KERALUM, Henri JANVIER and Antoine TELMON once travelled to bring the Gospel to the rancheros along the Rio Grande.

Brownsville’s Bishop Daniel Flores blessed the participants. A cowboy on a horse led them all to the front of the Cathedral. The bells of the Immaculate Conception Cathedral rang and the riders were off on the 62½ mile trail.

Two other Oblates, Frs. Roy SNIPES and James PFEIFER, greeted the tired bikers at La Lomita chapel, a small church outside of Mission, Texas. Both the Cathedral and La Lomita were designed by Father Pedrito Keralum, the Oblate architect and missionary!

You don’t have to dig deep to find evidence of the Catholic faith in Lowell, Massachusetts.

A team of archeologists from the United States and Ireland recently conducted an excavation in Lowell to find clues to one of the country’s earliest Irish settlements. They chose the grounds of the Missionary Oblates’ St. Patrick Church as the excavation site.

One of the first artifacts the archeologists discovered was a rosary. They estimated it to be 150 years old. Over the next seven days, 1,300 artifacts were unearthed, most dating back to the early 19th century.

“We found a huge number of artifacts from that time period,” said Colm Donnelly of the Queen’s Centre for Archeological Fieldwork in Belfast, Northern Ireland. “These items come from an early Irish shantytown where about 400 people lived.”

The archeological dig took place through a partnership between Queen’s University in Belfast and the University of Massachusetts at Lowell. Items discovered during the dig included clay pipes, buttons, pottery and nails. The team also discovered evidence of former buildings that will be further excavated later this year.

Irish laborers began settling in Lowell in the early 1820s. Most found work digging canals that powered the new mills. At the time, the canals were the largest power canal system in the world. As more Irish immigrants arrived, the area became known as “New Dublin.” In 1831 local residents built St. Patrick’s Church.

The Missionary Oblates arrived in Lowell from Canada in 1868. Much of their work focused on people working in the textile mills, which included immigrants from Ireland and Canada.

Throughout the 19th and 20th centuries, the Oblates staffed most of the Catholic parishes in the city. It has been said that there have been more Oblate vocations from Lowell than from any other city in the world.

In 2004 the Archdiocese of Boston asked the Oblates to take over St. Patrick’s. The parish had become multicultural and the Oblates had a well-established reputation for ministering in diverse communities. Today St. Patrick’s is thriving -- liturgies are celebrated in English, Spanish, Vietnamese and Khymer (Cambodian). One parishioner, An Ros, was America’s first Catholic Cambodian Deacon.

While the nationalities of its parishioners may have changed dramatically over the past 179 years, the mission of St. Patrick’s has always remained the same -- to bring local residents closer to their Catholic faith.

It is a mission that began long ago. Just ask the archeologists. (Oblate World, June 2011)