The origin of St. Eugene de Mazenod Parish in the Archdiocese of Toronto dates back to 1990, when it became clear that St. Maximilian Kolbe Parish could no longer accommodate the needs of the large Polish Roman Catholic community living in Mississauga. This fact, coupled with the desire of Brampton’s Polish community to build an additional church, convinced Fr. Stanislaw BAK and members of the lay community that the project was a necessity. Bishop Terrence Prendergast concurred with these observations during his 1996 pastoral visit. Soon thereafter, Fr. Adam FILAS was named pastor of St. Maximilian Kolbe Parish and took on the task of planning the new parish in Brampton. Fr. Peter NOWAK speaks of the dedication of a large statue of Blessed Pope John Paul II in a square in front of the new church.

This celebration can be considered as the capstone of the Millennium undertaking in Brampton. Over the last twelve years, the statue of John Paul II, the “Pilgrim of Peace”, has seemingly been on a pilgrimage of its own.

When it first arrived on Canadian soil, it stood for a while on our “holy ground” upon which we have constructed St. Eugene de Mazenod church. Then it watched over us, standing near the parish rectory. It did not stand idle, for it kept on reminding us how blessed we are to have had the gift of Pope John Paul II. After his death, it challenged us to continue living his earnest desire to see the world open its doors to the hope that comes from accepting Jesus as Our Lord, King, Teacher and Healer.

Now the statue of John Paul II welcomes pilgrims to our parish from the John Paul II Square, blessed through the toil of so many of our faithful, kept strong in prayer and commitment to Catholic values by our pastor, Fr. Adam Filas. It was only right that the John Paul II Square opening ceremony was conducted by none other than Cardinal Stanisław Dziwisz, the right hand man of our beloved pope. We honoured him by naming the road leading to the square from Polonia Avenue “Cardinal Dziwisz Street”. In turn, the Cardinal blessed us with an unparalleled gift, the first-class relic of the blood of Blessed John Paul II.

Through the intercessions of the faithful, God blessed us with a beautiful sunny day and with the presence of Bishop Matthew Ustrzycki and many dignitaries (both on the federal and civic level of the government, Polish and Canadian alike). A prayerful atmosphere permeated all who gathered for this celebration and there was not a dry eye among those who witnessed the moment when, at the steps of John Paul II Square, we venerated the relic of the blood of our Blessed Pope. (Assumption Province, News and Views, November 2011)

Making a difference in New Orleans

The OMI Lacombe Province’s Oblate Youth Ministries Team tries to encourage our young people, teachers, parents to recognize how blessed and fortunate we are, and so to be more attentive and responsive to those in need. In February 2011, and again in March 2011, the Oblate Youth Ministries Team, along with several teachers, organized two groups of high school students to respond to the “Katrina Klean-up” in New Orleans, Louisiana, following the terrible hurricane and flooding of August 2005. Six years after the catastrophe, neighbourhoods of New Orleans are still a mess. The youth of École Secondaire Ste. Marguerite d’Youville and St. Albert Catholic High School went to New Orleans… to make a difference!

The hospitality of Fr. Tony RIGOLI and Fr. John MORIN and the people of the parish was overwhelming, leaving many of our youth in tears and heart-felt gratitude. We went “to make a difference”, and I believe we did. However, the greater difference was the “change of heart” for us. The love and acceptance, (and stories) of the people of New Orleans impacted us… they made a difference in us. 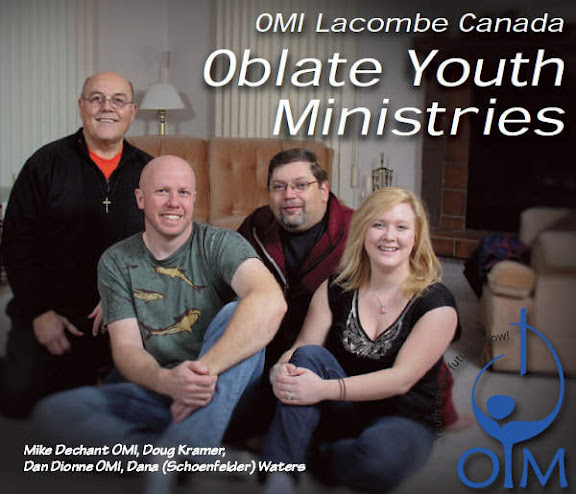 This coming Spring Break, 21 students and 3 staff members from Morinville High School, along with the Oblate Youth Ministries Team, will be participating in another mission to New Orleans. Again, our young people will have an opportunity to meet and work with the people of Our Lady of Guadalupe Parish. (OYM newsletter, Christmas 2011)